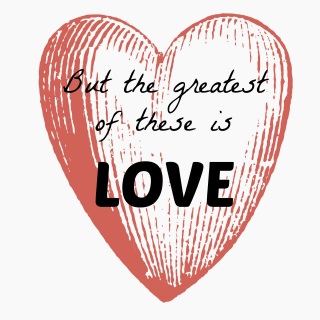 1 Though I speak with the tongues of men and of angels, and have not charity, I am become as sounding brass, or a tinkling cymbal.

2 And though I have the gift of prophecy, and understand all mysteries, and all knowledge; and though I have all faith, so that I could remove mountains, and have not charity, I am nothing.
3 And though I bestow all my goods to feed the poor, and though I give my body to be burned , and have not charity, it profiteth me nothing.
4 Charity suffereth long , and is kind ; charity envieth not; charity vaunteth not itself , is not puffed up ,
5 Doth not behave itself unseemly , seeketh not her own, is not easily provoked , thinketh no evil;
6 Rejoiceth not in iniquity, but rejoiceth in the truth;
7Beareth all things, believeth all things, hopeth all things, endureth all things.
8 Charity never faileth : but whether there be prophecies, they shall fail ; whether there be tongues, they shall cease ; whether there be knowledge, it shall vanish away .
9 For we know in part, and we prophesy in part.
10 But when that which is perfect is come , then that which is in part shall be done away .
11 When I was a child, I spake as a child, I understood as a child, I thought as a child: but when I became a man, I put away childish things.
12 For now we see through a glass, darkly ; but then face to face: now I know in part; but then shall I know even as also I am known .
13 And now abideth faith, hope, charity, these three; but the greatest of these is charity.
1 Corinthians 13:1-13 KJV

Blessings to you as you love as Jesus does!